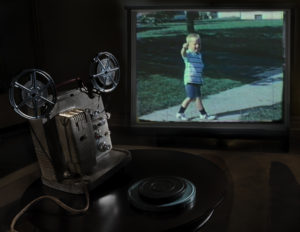 Creating the G(love) series brought up many childhood memories.   At first, all were negative experiences that reinforced my perception of my father with all his faults and tragedies.   However, during the process of creating G(love), I was able to see these experiences from a different perspective.   The belief that my father “never gave me anything except heartache” was slowly replaced by a long list of very specific positive traits, skills and opportunities that were given to me from my Dad.  Many of these were jolting but pleasant surprises.  For example, I realized just a few years ago that my introduction into image making started with my Dad filming me around the house and yard.  This astounded me.

I started to look for these connections as I realized that there were probably more surprises to be found.   It was not difficult.   Most were memories that had been part of my conscious past; it was just a matter of seeing them from a different perspective.    These memories and their transformation from pain to pleasure are the framework of Re-Remembered; a 45-minute monologue designed to be delivered surrounded by the large photographic works contained in the G(love) series.  It’s a testament to the belief that it is never too late to have a happy childhood.

Someone once asked me; “When did you break from your father? When was the moment he was no longer “God?”.  I think we all have a moment like this. The moment when the spell is broken. The moment we realize our parents are fallible.  The moment our father or mother is pushed off the pedestal.

My father and I are playing catch in the backyard when it happens. I had just raced home from 1st grade desperate to see him. He was home from an extended stay at Marlboro, a psychiatric hospital in central New Jersey.  I had burst through the front door and jumped into his arms. I felt the roughness of his 3 o’clock shadow against my cheek. It was comforting. An hour or so later he said the words I have been waiting an eternity to hear; “Get my glove.”.

Now in the fading light of the backyard, my father throws a baseball and I catch it. Just like I knew it would be. I am good at this, this game of catch, and no matter what I imagine I have done or said to make them take my father away, I know I am good at playing catch and it makes it all better.

Then I miss one. How could this be? Another throw and another miss. This wasn’t supposed to happen. I am confused. Hurt. I’ll get the next one I vow. A throw, a miss and another shameful walk to pick up the ball. I am near tears. I can’t look at my father. I pick up the ball and throw it back. Now, trying really, really hard, I concentrate on following the ball into my glove, the way my father taught me. Another miss, but this time I realize the ball isn’t going straight, it is moving right to left, it is curving. My father is chuckling, and it suddenly dawns on me that he is doing something to make the ball curve.  He is MAKING me miss! My body starts screaming but I am silent. I throw the ball back hard. Okay this time, this time I will catch it. He throws again. I watch the ball as it moves right to left and then down. I reach with my glove just as the ball is about to hit the ground. I catch it! That is the moment.  I then throw it back with a glare and a force that is a five-year-olds’ equivalent of “Fuck you!”.  My father is off the pedestal forever.

12 years later, I stand on the mound on warm and windy day. Senior year in high school. The catcher puts down two fingers and I throw another deuce. It is breaking big and wide today. The batter flails helplessly. Strike three. Someone on the bench enters another K in the scorebook as I walk off the mound. It is the end of the third inning. I have struck out eight of the first nine batters.

I went on to strike out 14 batters that day. 14 strike outs, one walk, no hits. It was that big, sweeping curveball that was the killer, starting right at the batter’s head and then sweeping across and catching the low outside corner of the plate. Unhittable.

I rode that curve for a long time. It was my ticket to college, securing my spot at Rochester Institute of Technology (the Yale of colleges for aspiring photographers then) when my grades alone wouldn’t get me in. My RIT schooling then opened the doors to a lifetime of career opportunities.  These days I am still playing baseball and creating photographs, and in many ways, it all started that late afternoon catching curveballs in the backyard at age 5.